LE TAILLEVENT BETWEEN GRACE AND AUTHENTICITY

Paris 8e : Le Taillevent, the mythic two stars restaurant surprises us again with the arrival of chef Giuliano Spérandio in september 2021 at the lead of the prestigious kitchen’s brigade and the entire makeover of the design by Yann Montfort’s Agency. In collaboration with famous craftsmen, Yann Montfort successfully recreates the past authenticity and charm of the illustre restaurant with a subtle touch of modernity.

THE TAILLEVENT’S MYTH OR THE FRENCH “ART DE VIVRE”

The name Le Taillevent goes back to the 14th century and was inspired by Guillaume Tirel who wrote the first cooking book Le Viander in 1380. Guillaume Tirel was French King Charles V’s cook, and liked to go by the name of Taillevent.

A CREATION FULL OF HISTORY

To pay tribute to this talented precursor’s cook, André Vrinat created in 1946 the first Taillevent, located in the 9e arrondissement of Paris and won the very next year his first star at the Guide Michelin. Then, the restaurant moved into the magnificent mansion of Duc de Morny in the 8e arrondissement.

In 1954, André Vrinat was rewarded again for his incredible work with a second star. The adventure keeps going on with the children of the founder and the opening of other sumptuous places such as Les Caves Taillevent and the restaurant l’Angle du Faubourg.

THE GARDINIER BROTHERS CONTINUE TO WRITE THE LEGEND

In 2021, the emblematic restaurant presents itself to the world in its new and authentic design, remastered with a modern touch.

This upscale restaurant located near the Champs-Élysées is pleased to receive and serve famous people for private dinners and intimate moments of degustation.

THE PLACE TO BE IN PARIS

Nestled in an ancient aristocratic mansion, Le Taillevent whispers secrets to its guests through its remarkable woodworks and authentic molding. This place to be of French gastronomy treasures a beautiful wine cellar full of incredible bottles, probably the best in Paris.

Le Taillevent is actively involved in the creation of a vegetable garden for its own needs at the gates of the capital and the culture of grapes for biodynamic viticulture. Above all, Le Taillevent is a beautiful meeting with local products.

Moved by the will to sublime the secular architecture and prestigious decor, Gardinier’s family is particularly attentive to the excellence of its service. Nowadays,very  few restaurants can boast such exigence, Le Taillevent is one of them. Experienced butlers prepare with discretion and elegance the traditional flambage de crêpes Suzette Taillevent with fresh fruits, raw milk and orange blossom flavor.

HOW DOES YANN MONFORT’S AGENCY MELT GRACE WITH AUTHENTICITY ?

THE ASSETS OF YANN MONTFORT’S AGENCY

The Maison Taillevent Paris collaborates again with the Agency to recreate a whole universe. This time the stakes are high. Yann Monfort’s Agency mission is to relate the authenticity of the ancient place to the modernity of our century.

So, what was the goal ? The designers had to rethink and harmonize the entire decoration to make the restaurant welcoming to everyone. Tables have been nicely placed in intimate spaces to improve privacy and comfort.

Beautiful stories came true from tradition, here, Yann Monfort chose to sublime the gorgeous woodworks and its enigmatic fragrance. Every detail has been crafted to create differents atmospheres according to the events taking place and moments of the day.

Curve is the masterpiece of this design. Fluidity emanates from it and the harmony expresses itself through the two new benches of the dining rooms. The wavy movement of the benches create a warm line under the pilasters, pediments and marquees.

NOBLE MATERIALS FOR AN ENLIGHTENED DECORATION

The spectacular lighting creates a warm atmosphere so you feel confident and comfortable to have a nice and long discussion.

The choice of furniture’s design has been made regarding the different places. A spectacular iron structure shows Taillevent wine’s collection. This new decoration is a vibrant tribute to the oenological selection.

To emphasize each detail with elegance and precision, Yann Monfort collaborated with worldwide renowned French craftsmen.

The creation of glasses “églomisés” was made by Solène Eloy. This gifted french creator also imagined the golden copper’s leafs on the woodwork of the Lamennais room. This piece of work interprets with poetry and originality of Guillaume Tirel’s Le Viander. Agency’s designers drew the screens in marquetry and Les Ateliers Lison de Caunes made it. All these new delicate elements create an intimate decor and the warm lights above private tables make the place welcoming and peaceful. The objective has been reached: create a comfortable decoration in symmetrical lines and a room made of stones.

The meeting of passionate people of interior architecture and gastronomy highlights this prestigious place full of secrets and history. Le Taillevent is an invitation out of time thanks to the perfect match of wine and food made by a talented French gastronomy Chef. A Parisian reference of gastronomy for an unforgettable moment. 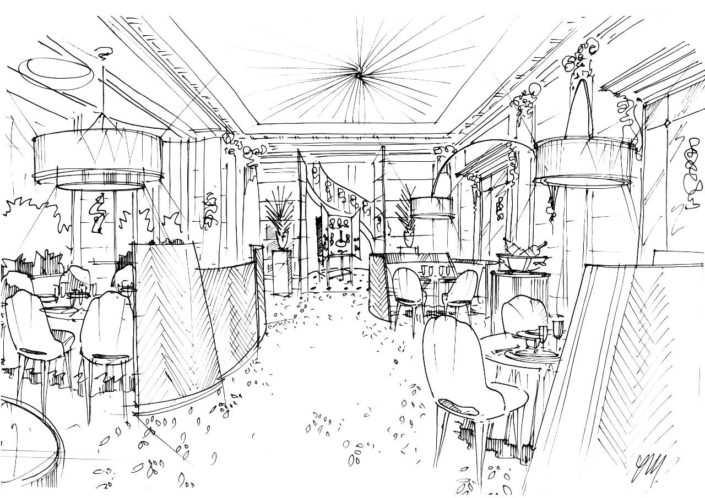 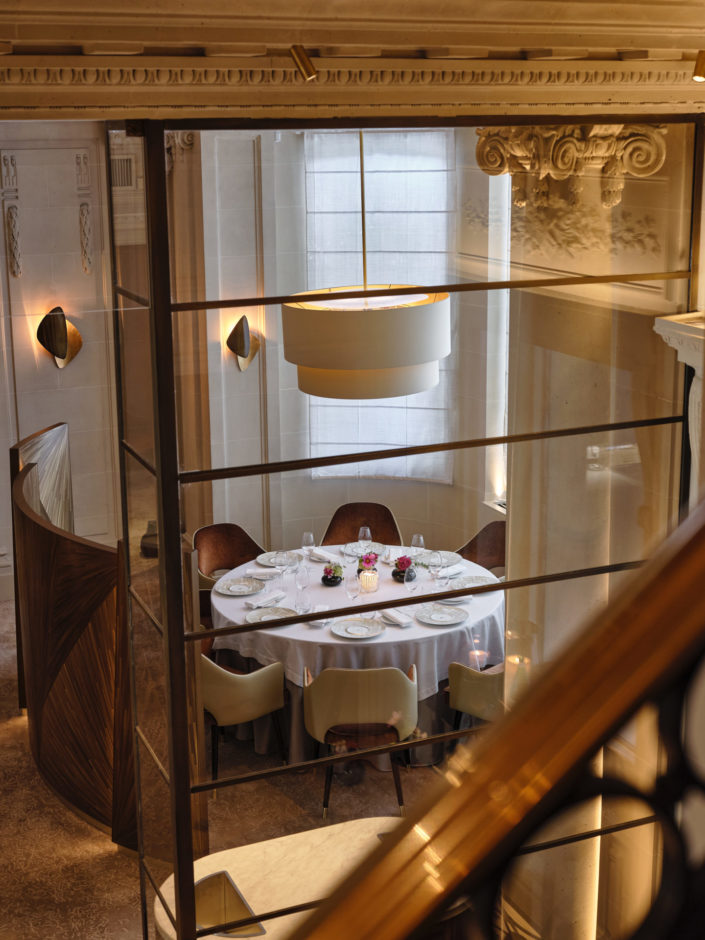 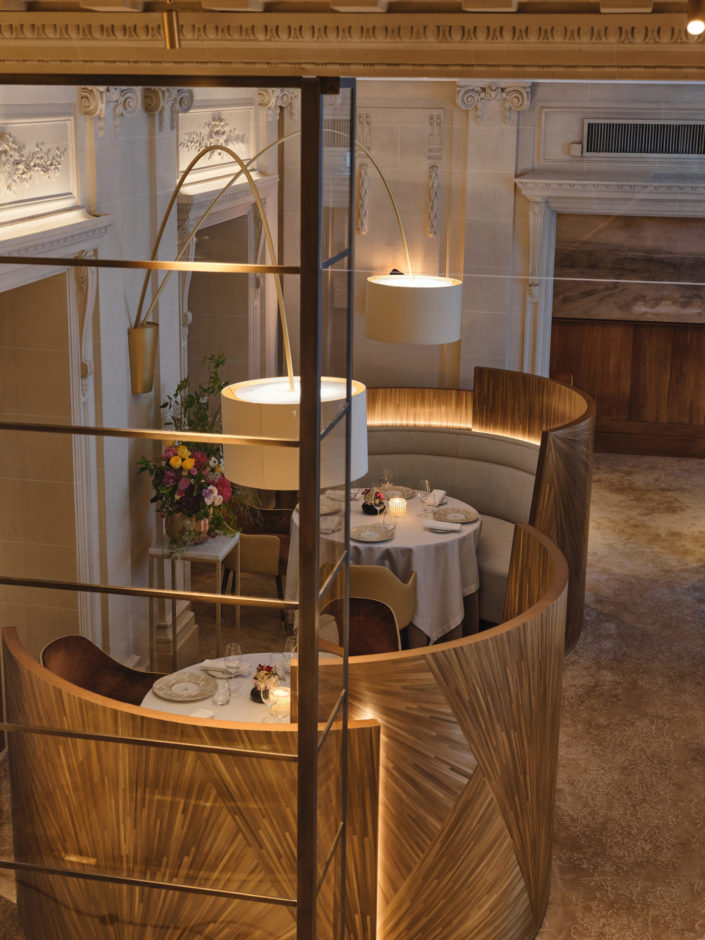 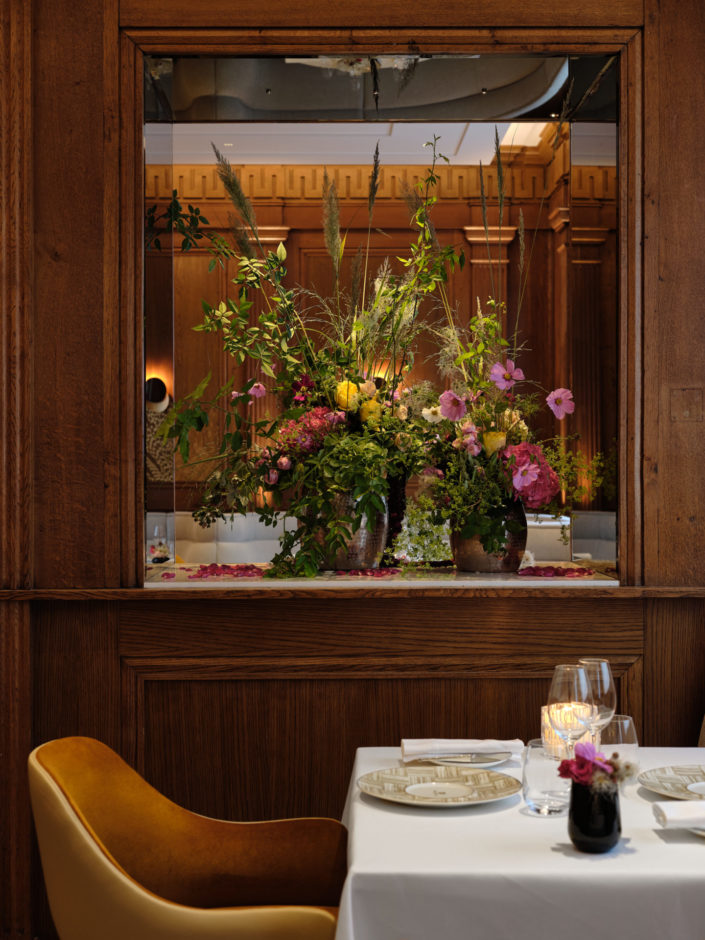 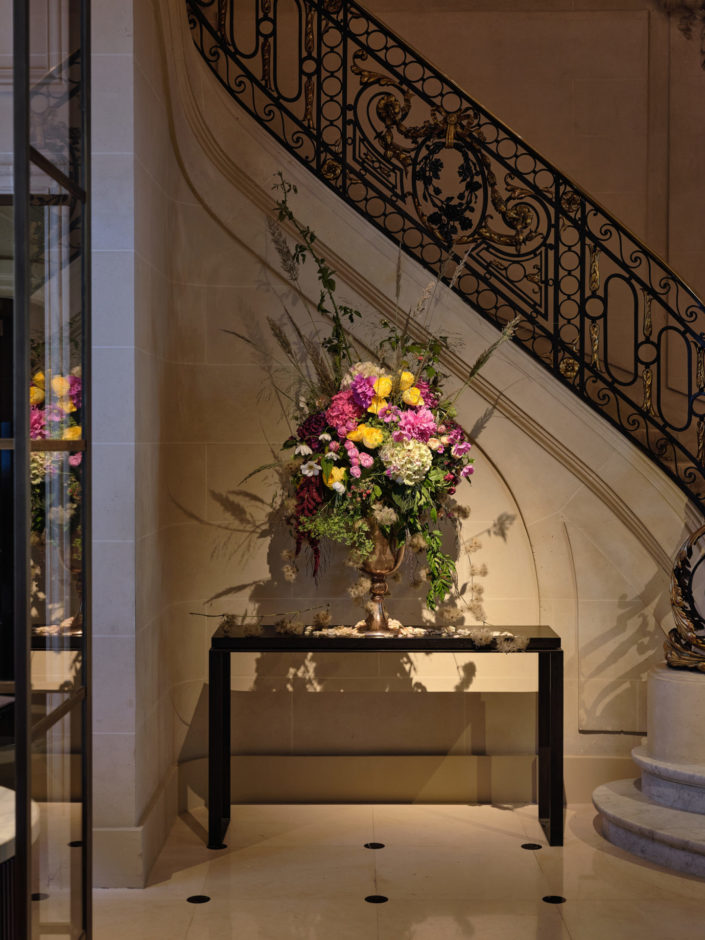 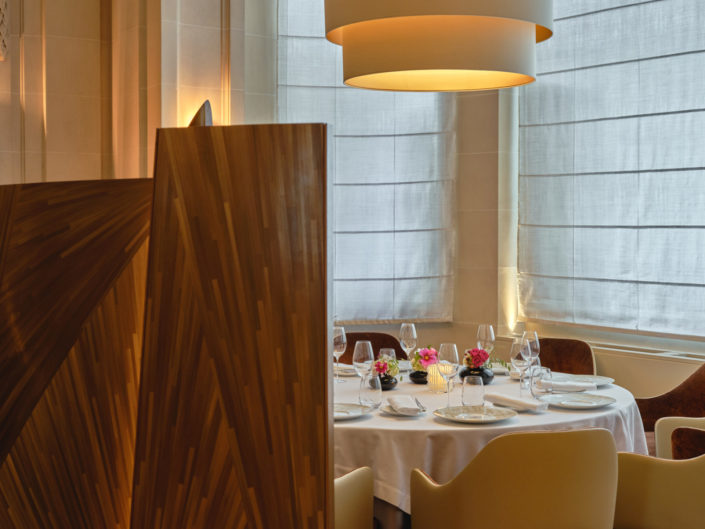 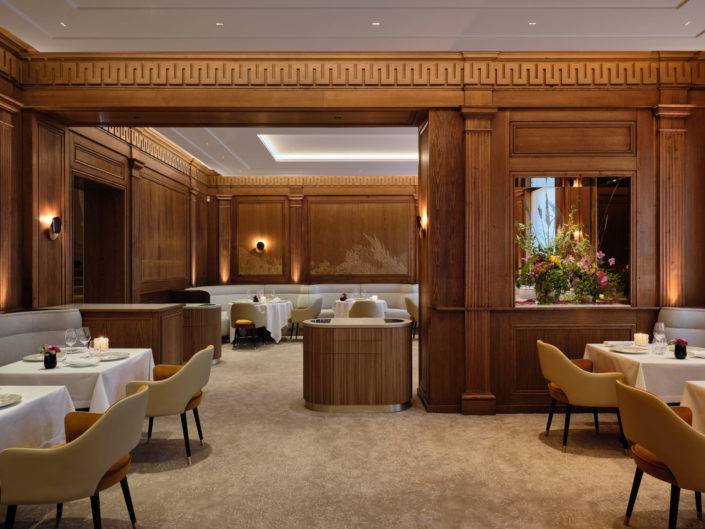 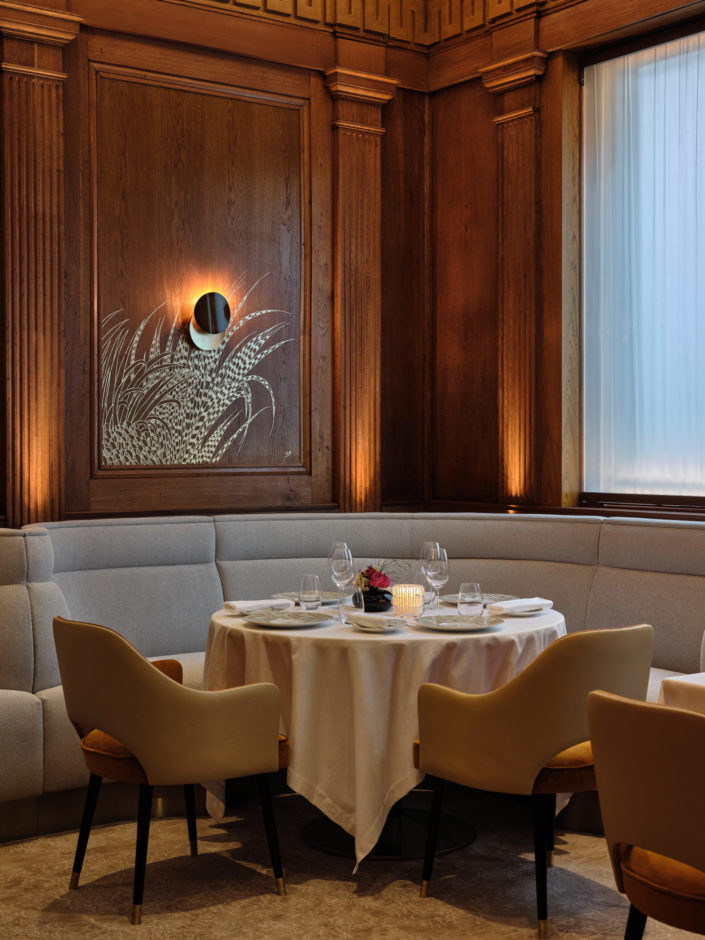 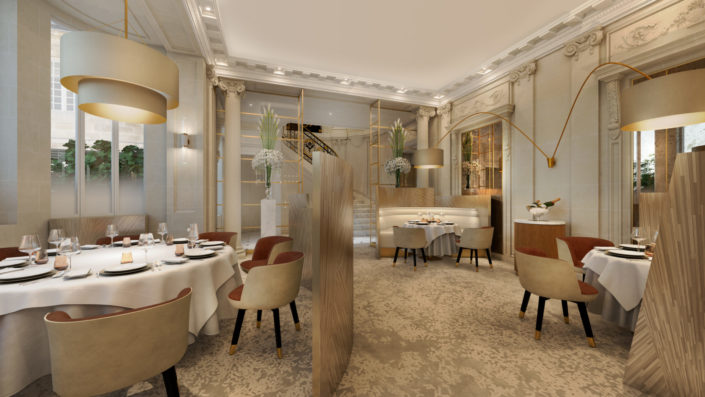 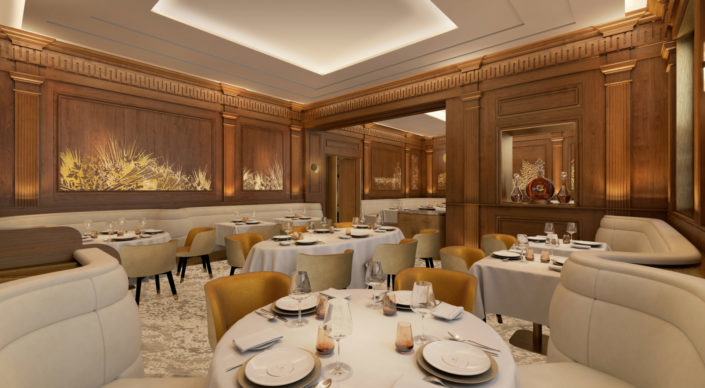